My level of “busy” has increased dramatically over the last month and yet, I’ve still managed to discover a few new recipes that my girls and I enjoy. First let’s start out with a warning, as my girlfriend put it “Cooking is chemistry and substitutes are not created equal.” In my lapse of judgement, I took a recipe for banana bread that my sister always has great success with and subbed almond flour and syrup/honey for the regular flour and sugar portions. I should have stuck with what I know because these banana muffins turned into a hard, yet gooey, contraption…which, incidentally, my 3-year-old gobbled up. But she would.

For Valentine’s Day (Love you!) my 3-year-old was scheduled for class snack and my 4-year-old had a class party. When I saw the sign-up sheet for snacks and paper products hanging in the hallway the week before, I quickly added my name to the “Cupcake” slot. This was my (neurotic) way of not only controlling some of the sugar/gluten intake of my own child, but that of the whole class. After writing in my name, I thought “I better come up with something good.” My 4-year-old prefers vanilla and my 3-year-old prefers whatever her sister says, so I began a search for a cupcake worthy recipe for both girls to share with their friends. It wasn’t long before I found a Paleo appropriate cupcake. I tested the recipe in a half portion, which also worked very well. The only change I made to it was grade b maple syrup in place of cane sugar. It turned out to be a light, fluffy cupcake, similar to angel food. DELISH. I then whipped up an icing of almond butter, dark cocoa, butter, and a dash of coconut milk to my preferred consistency, topped with Enjoy chocolate chips and ate entirely too many chocolate/vanilla delights!

Of course, then I remembered the “no nut” rule (almond butter in the icing) and my daughters’ protest of the chocolate topping instead of vanilla, so I began on a new adventure looking for vanilla icing. This journey was not as successful and I was running low on time. I decided to cut my loses and use a Betty Crocker Butter Cream topping (just enough to cover the top) which is gluten-free and allowed the girls to decorate their class’ cupcakes how they saw fit. Everyone was happy in the end.

This morning, I tried a new pancake recipe which turned out to be another success! While the 3-year-old was eating the awkward banana muffins from last night, she helped me mix and stir the ingredients to a fluffy, coconut pancake I found while searching for vanilla cupcakes. The batter was the most like a regular pancake of any Paleo recipe I’ve found. I sprinkled a bit of cinnamon on a couple and left the others plain. My 4-year-old gobbled up a few herself, while I enjoyed a few (more) myself with a side of maple syrup, in addition to some fresh-cut pineapple which are on sale this week and super juicy. 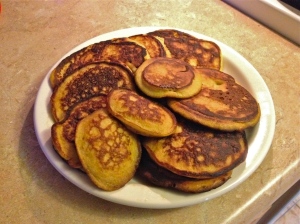 Speaking of Valentine’s Day, friends of ours invited a few families over for brunch the sunday prior in celebration. Of course everyone offered to bring something delicious to eat, so I decided to make bacon-wrapped, almond-stuffed dates. When I reached for my newly purchases container of dates, it was nowhere to be found, so I had to improvise fast. I cut the bacon into portion sizes, about 3 or 4 inches in length, laid them out on parchment paper atop a baking sheet, then drizzled just a tiny bit of grade b maple syrup over them. I baked them at 350 for about 45 minutes. The syrup didn’t allow them to curl upon heating and created a delicious bacon-candy. For the 2nd batch, I baked the bacon plain, then added chopped dark chocolate bits for the last few minutes (until melted) after which I sprinkled with crushed walnuts. SO YUM. I forgot to take a picture, but I’m sure you can imagine the heaven I created, and of course a piece or two will do you.

My bacon candy wasn't on a skewer or dipped in chocolate, but sprinkled with it. I still found this to be a great visual.

Disclaimer: I have no idea where I bought my Coconut Flour, I thought it was from GIANT in their Healthy Foods Aisle, but my sister said there was no such thing and found it at the Healthy Grocer. I will buy it online in the future, as it tends to be cheaper if you find a site with free shipping.

Come visit my store on CafePress!