Lately, I’ve been able to stretch my 7 day meal plan and shopping to 8 or 9 days. Whether it’s because I just don’t have the time or I’m force-feeding leftovers to the family, I’m grateful since we’re still in a tight financial spot, as so many of us are, and need to conserve every penny.

That being said, the 4-year-old who named this blog, turned SIX on February 23rd and her younger sister turned 5 yesterday. We aren’t outrageous with gift-giving but when the yearly “Birthday Extravaganza” comes around we celebrate our daughters from one birthday to the next, as any proper celebration should play out. 30(ish) days of extraordinary fun! The little extras add up fast and I’m honestly looking forward to re-tightening our pocket. 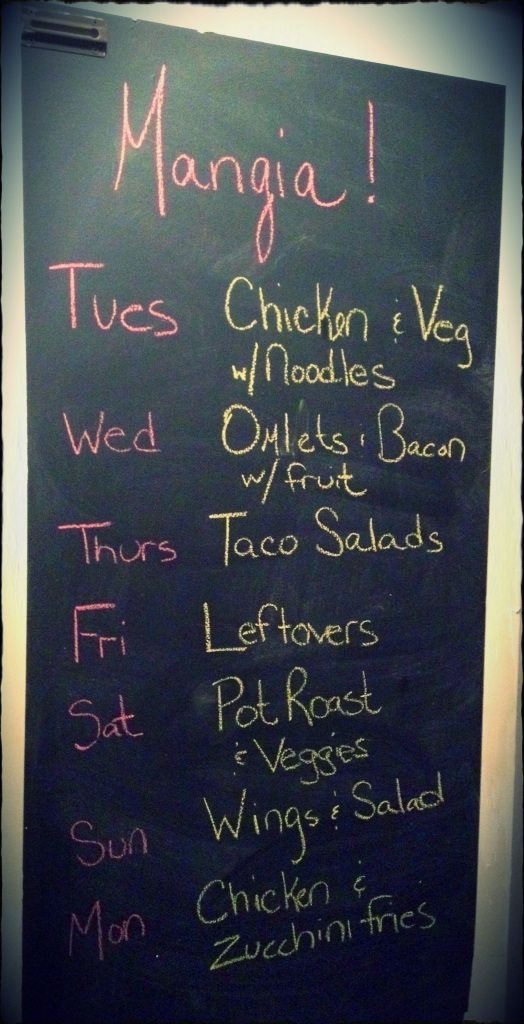 This week’s menu was thrown together just for the blog. I went shopping Tuesday morning while my little one was at preschool. Upon my husband’s request, I picked up a roast, I also went for the organic chicken club pack which cuts the cost per lbs from $7.99 to $6.99 and includes portions for 2 dinners instead of one. Chicken thighs and wings seem to be a staple these days because 1) they’re a cheap option, 2) my family devours them and 3) they’re easy to make, bake and the leftovers are bangin!

Incidentally, a friend recently suggested a way to save money was to skip the organic chicken breast and go conventional. I won’t argue a monetary savings here and have typically suggested the same.  He added “Almost every article I read says that the nutritional benefit over regular chicken breasts is negligible. Most impurities and toxins are stored in fat and chicken is so lean that only trace amounts would even exist”.  He is an intelligent and trusted friend, with killer hair, so I stored this info in the ole’ brain and went for a sale on conventionally raised chicken drumsticks a few weeks ago, not breast meat, I realize. I roasted and served them to my girls for dinner. They didn’t gobble them up, as usual, but I didn’t give it much thought as appetite has ebbs and flows. The following day, I served myself a few for breakfast and nearly spit it out before I could get a napkin. The taste was so obviously inferior, it made me feel sick. Bad batch? I don’t know but it reminded me that choice does matter and organic chickens always taste better! I threw the rest away.

You’ll notice Tuesday starts off with chicken (cooked with onions and peppers) and noodles. I finally found a gluten-free, GMO-free noodle option at my local grocery store: TruRoots. After reading the website, I see they claim an ‘al dente’ texture after cooking. My husband, however, says he over cooked his first batch and they were a little mushy, but decent enough to eat. I didn’t warn him they were ‘different’ then his regular noodle variety so it doesn’t’ surprise me that it overcooked. Regular noodles could boil for much longer then required and still not become mushy. Imagine that sitting in your gut… just chillin. Despite over-cooking, he said he’d eat them again and that’s a win for me since we rarely have noodles and now we have some in stock.

Another exciting find I made was on thursday morning when I stopped by the grocery to pick up some taco shells for my now-5 year old’s requested birthday dinner: Bearitos. This little gem of a company is also non-GMO (found through my non-GMO app) and for a corn meal/chip company it was thrilling discovery since 85% of the corn in our country is genetically modified and that creeps me out. I suspect it’s mostly gluten-free as well, but they do not follow the testing practices for gluten so they do not claim it. They were delicious and had a more authentic taste then the cheaper, standard taco shells. I will now only buy GMO-free tortilla chips, as well. We’ve found and tried 1 or 2 other brands at my local store, my husband says they’re good but aren’t salty enough and I’m okay with that.

During this quick trip to the store, I decided to check the organic meat section for sales while I was there. Often you can find a few items marked down in yellow to add to your freezer and low and behold, I DID! 1 package of organic pork sausage (I often cut up and use sausage in my soups along with another protein) and 2 lbs of organic ground turkey breast were marked 50% off, so I snatched them up. That means you’ll have to add $4 for the taco shells and $12 for the extra organic sale-meat to my receipt for the week. Worth it!

I think I’ve covered everything from this week. My last request: Your favorite recipes including chicken thighs and ground turkey. Please comment here or add them to our Facebook page and you may see them on next week’s menu! Also, I added the spice combination I used for our taco seasoning to the Facebook timeline. Check it out & share with friends!

I’m a member of a group of women who like to gather and ‘Lunch’ occasionally, which basically means drink wine, eat delicious food and chat each other up till the clock strikes and we all run back to our real lives. Today a member of the Ladies Who Lunch, who also happens to be a sister of mine, asked if we’ll be getting together in March. I quickly checked my calendar (thank you iPhone for organizing my life) and realized there is not one free moment this month. BUSY AS HELL! I kindly declined and then got thinking about preparing a few items for the kids, who have reverted to Cheerios 6 days a week for breakfast, much to my dismay, and for myself as far as breakfast and snack options during these hectic days running to and from schools and work and appointments. Today is the only day I have nothing scheduled. It’s been a real treat with no sense of urgency weighing on my back.

Currently, we have a new version of our infamous Paleo Muffin in the oven. This time I went with the basic ingredients and added a chopped, organic apple to the mix after reviewing Sarah Fragoso’s Paleo Apple Muffin recipe in my recently returned hardcopy of “Everyday Paleo” – Thanks Katie. The recipe looks something like this:

Another delicious treat I’ve been slacking on is mashed sweet potatoes, which take too long to make on the fly. I picked up a few, along with other essentials, while the kids played in the grocery store childcare this afternoon. That’s right folks, our grocery ‘giant’ has a childcare room that allows for 1.5 hours of grocery shopping bliss. Although sometimes I spend that time in the cafe reading, blogging, or working. It’s quite the commodity. Okay, back to topic: I have the potatoes peeled, sliced and boiling as we speak. Remember, after mashing, sweet pots only need a bit of coconut oil or butter added, too much and you’ll have a soupy mess. I store the end result in glass tupperware and refrigerate, portioning out at dinnertime and often baking it off in the oven while the meal is prepared. Butter and salt on top is total YUM. Incidentally, my girls saw me slicing ‘those orange taters’ and got very excited, looks like we’ll be adding some to the side of tonight’s dinner as well. 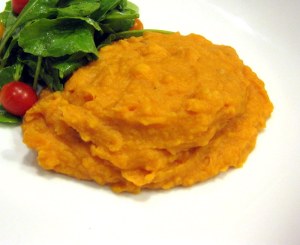 So… in the time I’ve been preparing the muffins and potatoes and attempting to write this blog, the first batch has finished and are a HUGE HIT with myself and my girls. We even made a mini batch and cooked them off in the Easy Bake oven. My soon-to-be 4-year-old, Roe, just gobbled up 5 mini muffins and my newly 5-year-old ate 4 before being cut off, as dinner is looming. Roe made me promise to include a muffin on her dinner plate – OKAY by me. These muffins will make a great treat for breakfast and will also be good to travel with as I have a trip looming, but don’t worry, I’ll blog about that soon enough! (HINT: I am a certifiable Paleo Geek)

I was truly disappointed when I went for a stem of Brussel sprouts and they were out of stock at the grocery today. I’m not sure what else I will be preparing, but thinking ahead for this week, and keeping in mind my stock of frozen meats, the crock pot looks like a million bucks right about now. What have you made recently that is non-grain, gluten-free and super delicious? I need ideas, help a girl out!

P.S. Nature’s Promise Uncured Bacon is on sale this week. I always stock up when this sale occurs – $2 off – and their stock often runs out, so get it while you can!

Come visit my store on CafePress!